The Founder of Peace and National Unity — Leader of the Nation, President of the Republic of Tajikistan Emomali Rahmon received in the Palace of the Nation the Minister of Foreign Affairs of the Russian Federation Sergey Lavrov, who is in Tajikistan on an official visit.

A wide range of issues pertaining to bilateral and multilateral cooperation between Tajikistan and Russia were the subjects of the discussion.

At the beginning of the meeting, President Emomali Rahmon said that “the smooth development of the Tajik – Russian relationship occupies a special place in the foreign policy of the Republic of Tajikistan.»

Both sides underlined the necessity of resolving the issues of trade and economic cooperation between the two countries, development of joint investment projects, the use of new technologies for processing industrial goods, cotton recycling, fruits and vegetables, as well as the use of natural resources, increase of supplies of environmentally healthy fruits in the Russian market and transport and logistics centers.

The two sides also had a useful discussion related to political integration, regional security, military and military-technical cooperation, border protection, fight against terrorism, extremism, illicit drug trafficking and other forms of transnational organised crime, difficult political and security situation in Afghanistan as well as the program of modernization of Tajikistan’s armed forces.

The parties also touched upon the labor migration issues, cultural, humanitarian, scientific, and educational ties, including the construction of new secondary schools in Tajikistan with Russian language lessons and providing its educational institutions with teachers of Russian.

The interlocutors also exchanged their views on issues relating to international and regional matters. 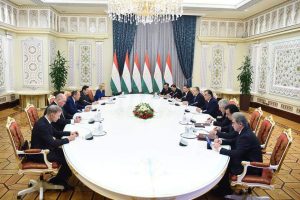