Ancient agricultural settlement Sarazm is located on the left bank of the Zarafshan River, 15 km west of the town of Penjikent, the Republic of Tajikistan, 500 meters north of the Penjikent-Samarkand highway and on a hill extending from west to east for about 1.5 km, a width of 400-900m, the territory of the monument occupies more than 100 hectares. Geographic coordinates are 39 ° 30’28.4 «northern latitude, 67 ° 27’31.4» Eastern longitude, and the average absolute height is 910 m above sea level.
In antiquity, Sarazm had an important strategic location in Central Asia, a contact point between nomadic tribes and the first agrarian settlers of Traxsoxania (the region between Syrdarya and Amu Darya), which was the key to its unique development during the 4th-3rd millennia B.C. Through the organization of trade between these two groups, Sarazm contributed to the improvement of these relations and became more significant locally and regionally. Gradually, Sarazm became the main trading center in Central Asia, which established relations with the settlements of the Eurasian steppe and the Aral Sea in the north, Turkmenistan and the Iranian plateau in the west and the Indus valley in the south. In many ways, this was facilitated by the presence of minerals in the surroundings of Sarazm, making it the first large center for the extraction of copper, tin and lead and other metals in the Central Asian interfluve in the 4th-3rd millennia B.C. Thus, Sarazm becomes the main center for the production of paleometal in the region and develops as a proto-city center. In addition, there were manufactured industrial goods — jewelry and objects made of bronze, lead, silver, gold, steatite and semi-precious stones (turquoise, agate, lapis lazuli). The emergence of more advanced production processes and improved technology has led to many social changes. The beginning of specialization in the production of goods contributed to the emergence of social hierarchies and the completion of urbanization. In addition, the mountainous zone and a wide part of the valley in the vicinity of Sarazm were a favorable zone for farming and raising livestock, and the nearby “tugai” (jungle) in the Zarafshan coastal area also allowed the population to engage in gathering, hunting and fishing.
Due to years of archaeological research in the settlement, there four periods of habitation have been revealed (the Aeneolithic — early Bronze Age). A range of radiocarbon dates performed in the laboratory of the Museum of Peabody, Harvard University. 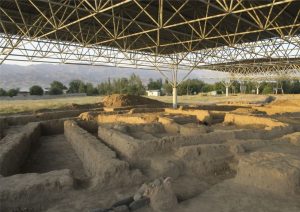 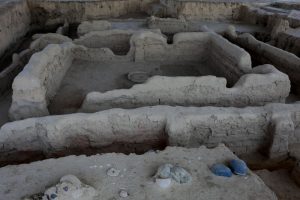 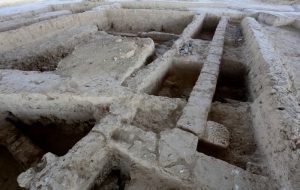 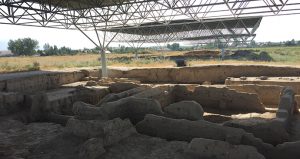 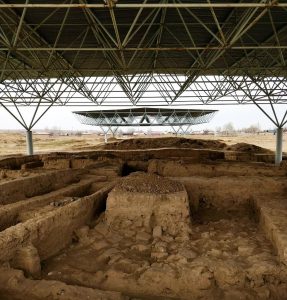 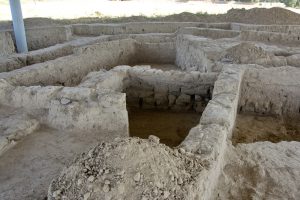