The Élysée Palace has hosted talks between President of Tajikistan Emomali Rahmon and President of French Republic Emmanuel Macron. The official welcoming ceremony was followed by talks.

Emomali Rahmon and Emmanuel Macron had a one-on-one discussion. Later the talks continued in expanded format, focusing on further expansion of bilateral and multilateral cooperation between Tajikistan and France.

President of Tajikistan expressed his satisfaction over the constantly expanding Tajik – French relationship based on a spirit of mutual respect and considering the national interests. Head of the Tajik state thanked the French government for the warm welcome and kind hospitality extended to him and his delegation.

Tajikistan and France hold the same position on the issues relating to climate change, the fight against security threats and challenges, such as international terrorism and extremism.

Extraction and processing of minerals, light and food industry, chemical, ferrous and non-ferrous metallurgy, including aluminum production are promising areas for further cooperation. The counterparts mentioned the importance of French companies in the implementation of projects related to the infrastructure and energy, industry, agriculture and health care in Tajikistan for the enhancement of economic engagements.

The sides also discussed Tajik – French cooperation within the framework of international organizations, including the European Union.

The two sides also exchanged views on the fight against global threats and challenges, in particular terrorism, extremism, smuggling of humans, drugs and weapons.

Tajikistan has been a supporter of constructive initiatives geared toward achieving peace and stability in Afghanistan, and is interested in strengthening cooperation with all stakeholders in this regard, because ensuring security in Afghanistan is an important factor in sustaining stability in Central Asia.

President Macron proposed establishing a dialogue between France and the Central Asian nations at the level of foreign ministers.

At the end of the meeting, President Emomali Rahmon invited President Macron to visit Tajikistan, which was accepted with pleasure.

After the talks the following five new cooperation documents were signed in the presence of both state leaders:

— Declaration on cooperation in the field of toursim between Tajikistan’s Tourism Development Committee and the Ministry for Europe and Foreign Affairs of France; 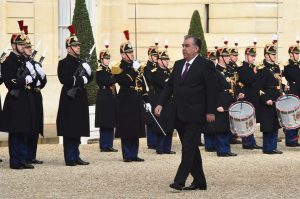 — MoU on educational cooperation between the National University of Tajikistan and the University Paris 1 Pantheon-Sorbonne.