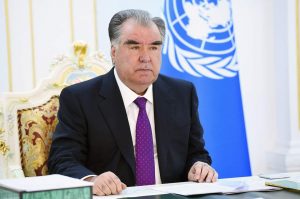 At the outset, I would like to welcome the launch of a new initiative integrating the two most pressing issues of the current development agenda — water and climate.

I am grateful to the World Meteorological Organization and the UN-Water for this initiative and for the invitation to participate in this important process.

Everybody is aware that water and climate are inextricably inter-twinned with each other.

Undoubtedly, climate change is adjusting our daily life, primarily through the impact on water resources. We believe that one of the main indicators of this process is the intense melting of glaciers due to global warming. Unfortunately, we observe accelerated ice melting in various parts of the planet — in the Arctic, Antarctica and Greenland.

We notice significant changes on continental glaciers as well. According to the Assessment of the Himalayas in the Hindu Kush, we may lose more than two-thirds of the Himalayan glaciers by the end of this century. A similar situation is developing on the Pamir glaciers.

The melting of the world’s largest continental glacier in Tajikistan is a vivid example. I mean the Fedchenko Glacier with more than seventy-five (75) kilometers of length.

Studies show that in the last seventy — eighty (70-80) years alone, the Fedchenko Glacier retreated by more than 1 km, and has decreased by 44km2. Moreover, it has lost more than 15km3 in volume, and the glacier tongue has been retreating by 16m per year.

Glaciers are the main resource for freshwater. Their accelerated melting, coupled with an increase in water consumption associated with population growth and economic development, can lead to very negative consequences.

Unfortunately, the melting of glaciers in the Arctic and Antarctica is causing the sea level rise. This, in turn, can pose a threat to the lives and well-being of hundreds of millions of the planet inhabitants, especially in small island states and coastal regions.

It is obvious that this critical issue should be in the special focus of the world community, especially political leaders. In this regard, I propose to declare 2025 as the International Year for the Preservation of Glaciers, and to determine the date of the World Glacier Day.

In this context, I would like to recall once again about Tajikistan’s proposal to create a special International Fund for Glaciers, which could mobilize financial resources from various sources to take the necessary actions and implement objectives in this area.

I am convinced that these and other related initiatives would give impetus to a new global movement to take the necessary collective action and to protect glaciers from intense melting and disappearance.

It is also my belief that these initiatives organically fit into the mainstream of the measures currently taken by the world community within the framework of the Paris Agreement to reduce carbon dioxide emissions and prevent the global temperature from rising above two degrees Celsius (2.0 ° C).

Dear Members of the Panel,

You are aware that the Republic of Tajikistan has abundant water resources. The country forms about sixty (60) percent of the water resources of Central Asia.

The main source of these waters is the region’s glacial resources, more than sixty percent of which are located on the territory of Tajikistan.

In the twentieth (20) century, there were more than 14.500 glaciers in Tajikistan covering 8 percent of the country’s total territory. Unfortunately, due to the climate change impact, these glaciers began to melt intensively. Today, more than 1,000 glaciers of Tajikistan have completely melted.

The volume of the mass of the country’s glaciers has decreased by almost a third over a relatively short period.

This trend can obviously have very dramatic consequences in the medium to long term. At the same time, climate change has intensified the frequency of such natural hydro and meteorological phenomena as mudflows, floods, droughts, landslides and avalanches. Natural disasters inflict huge damage to Tajikistan’s economy and environment every year, undermining our efforts to achieve sustainable development. I would like to note that such challenges are typical for other countries of Central Asia as well.

That is why, Tajikistan has identified the issue of climate change impact as a top priority in the framework of its presidency of the International Fund for Aral Sea. In this context, we will make every effort to draw the attention of the governments across the region and the world community to proactive actions and taking urgent measures to counteract to this challenge.

The 2020 has become the most abnormal year for humanity. The COVID-19 pandemic has led to a major financial, economic and even humanitarian crisis. Moreover, last year was the warmest year for the entire period of observation. And, this is not the edge. According to some estimates, we can face tougher crises both in terms of the spread of new viruses and climate change.  And, humanity should be prepared for them.

In this regard, it is necessary to encourage in every possible way any effective mechanisms in the field of conservation of water resources and the global climate.

We are convinced that in the current context it is the nexus approach that can lay a strong foundation for addressing many issues and developing a «green» and sustainable economy. In our opinion, a comprehensive review of water, energy, food security, environment and climate issues harmoniously fits into the 2030 Agenda.

At the same time, we believe that special attention should be given to financing and investments in infrastructure and innovation. Global climate funds can make a significant contribution to this process. We believe that high-speed development of new technologies will play an important role in rational use of water and other natural resources. Achieving these goals is also impossible without proper cooperation and partnership.

We are convinced that the International Decade for Action «Water for Sustainable Development (2018-2028)” provides a good platform for uniting the efforts of the world community.

The international conference on the mid-term review of this Decade, which will be organized by the UN in two years (2023), can play a key role in integrating water and climate issues, contribute to their comprehensive solution to achieve sustainable development.

I am sure that our High-level Panel will decently contribute to the preparatory process of this important event, will further facilitate consolidation of the efforts by the world community, particularly political leaders, for more proactive action and adequate measures.

I wish all of us success and good luck along the way!