Meeting with President of Russia Vladimir Putin in Moscow 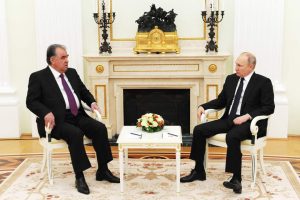 During the meeting the two leaders discussed topical issues of Tajik-Russian strategic partnership with an emphasis on trade, economy, investment, culture, and security cooperation, as well as certain issues on the international and regional agenda.

While expressed satisfaction over the process of the development of cooperation between Tajikistan and Russia in the above mentioned areas, President Rahmon emphasized that the Russia remains Tajikistan’s main and important trade and economic partner.

The volume of trade between the two countries in 2020 amounted to almost one billion dollars.

Taking into account the needs of the Russian market, increasing exports of eco fruits and vegetables from Tajikistan to Russia was emphasized.

Discussing further development of cooperation in health care, especially in combating the spread of the coronavirus pandemic, they also touched upon the course of implementation of military and technical cooperation programs.

The interlocutors also stressed the need to strengthen the joint fight against global threats and challenges, in particular terrorism, extremism, drug trafficking and other forms of transnational organized crime.

The discussion also touched upon the problems pertaining to the latest developments in Afghanistan, especially after the consideration of the US announcement on their withdrawal of troops.

While stressing the need to strengthen the protection of the Tajik-Afghan border, which is also a southern border of the CIS and the CSTO responsibility, President Rahmon expressed hope for the practical implementation of previously adopted decisions in this area.

Since Tajikistan is serving as the acting Chairman of the Shanghai Cooperation Organization and the Collective Security Treaty Organization, President Rahmon briefed President Putin on the implementation of planned activities, in particular the preparations for the summit which will be held this year in Dushanbe.

President Rahmon likewise briefed Russian President Putin on latest developments in the Tajik — Kyrgyz border. He emphasized the stable position of Tajikistan to resolve all existing problems through peace and negotiations.

At the end of the conversation, President Rahmon invited President Putin to pay an official visit to Tajikistan, which was accepted. The exact dates of the visit will be agreed upon through diplomatic channels.