Meeting with President of the Russian Federation Vladimir Putin 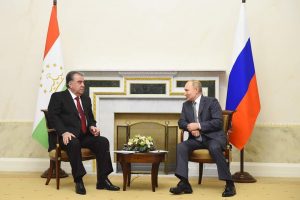 Today, in St. Petersburg, the Founder of Peace and National Unity – Leader of the Nation, President of the Republic of Tajikistan Emomali Rahmon met with the President of the Russian Federation Vladimir Putin on the sidelines of an informal meeting of the heads of CIS states.

During the meeting, issues of cooperation between Tajikistan and Russia at the level of strategic partnership and within the framework of the Commonwealth of Independent States were discussed.

President of the country Emomali Rahmon called today’s meeting a good opportunity to consider the prospects for cooperation between the two countries.

Satisfaction was expressed with the current state of bilateral relations, the progressive development of relations, the level of cultural and humanitarian cooperation and the volume of trade between the two countries, which in 2021 amounted to more than $ 1 billion.

During the meeting, the parties exchanged views on the use of broad opportunities in the field of metallurgy, mining, construction, healthcare, pharmaceuticals, and other spheres of the economy.

The interlocutors also reviewed the issue of creating a Council for attracting direct investment from Russia to the economy of Tajikistan to intensify investment cooperation and strengthen the work of the Intergovernmental Commission on Trade and Economic Cooperation to facilitate this process.

Among other topics of the meeting were the enhancement and bolstering of cooperation in the field of energy, cultural and humanitarian ties, labor migration, science, education, culture and health. The parties exchanged views on their further advancement.

At the meeting, the heads of state also discussed the political situation in the world community and the region, the difficult humanitarian situation in Afghanistan, security cooperation and other issues of interest.

At the end of the meeting, President of the country Emomali Rahmon invited the President of the Russian Federation, Vladimir Putin, to pay an official visit to Tajikistan at his convenience.