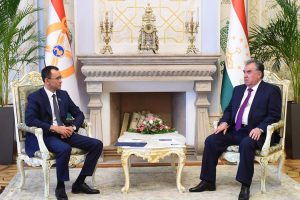 During the meeting, a wide range of issues of cooperation between the two countries was considered.

The President of the Republic of Tajikistan, Emomali Rahmon, said that the development of a strategic partnership between Tajikistan and Kazakhstan is a priority in the foreign policy of our state and is based on a long tradition of friendship, mutual understanding and support.

Satisfaction was expressed with the relations between the two countries, especially the reliable dialogue at the highest political level and constructive cooperation.

Issues of cooperation between Tajikistan and Kazakhstan in the political, trade and economic spheres and inter-parliamentary relations were discussed at the meeting.

It was noted that Kazakhstan is one of the main partners in the structure of our country’s foreign trade; last year the trade turnover increased by almost 30% and reached more than one billion dollars.

At the meeting, the parties expressed interest in strengthening cooperation in the cultural, humanitarian and educational fields.

In the direction of cooperation between the two countries within the framework of regional and international organizations, issues of ensuring security in the region were discussed, the parties exchanged views on topical regional and global issues, including the situation in Afghanistan.