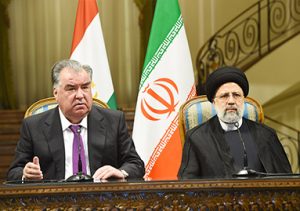 Dear members of the media!
Ladies and gentlemen!

First of all, I would like to once again express my sincere gratitude to His Excellency, the President of the Islamic Republic of Iran, Sayyid Ebrahim Raisi, for his invitation to pay an official visit to this ancient land.

I should note that earlier this year we celebrated the 30th anniversary of the establishment of diplomatic relations between our countries.

During this period, Tajikistan and Iran have consistently taken practical measures to find new ways to strengthen and expand inclusive relations and ensure their effective expansion, and have reached a high level of constructive cooperation.

We consider today’s meeting and negotiations as a continuation of the ongoing efforts of both sides in this direction, as well as meeting the highest interests of our people.

To this end, in the framework of this visit, we held fruitful talks in an atmosphere of mutual understanding, trust and respect, and discussed important issues of cooperation between the Republic of Tajikistan and the Islamic Republic of Iran.

We believe that the new package of documents signed during this visit, which covers the areas of economy, trade, transport, energy and other areas of mutual interest, will serve to expand relations between the two countries in various fields.

In particular, in accordance with previous agreements, a long-term program of economic and trade cooperation until 2030, as well as relevant documents for the establishment and operation of the Tajik-Iranian Joint Chamber of Commerce and Industry and the Joint Investment Council were signed today.

We are confident that the agreements reached during the talks will give a new impetus to cooperation between the two countries in political, economic, trade, investment, cultural, and humanitarian spheres.

Along with emphasizing the common historical and civil values of our peoples, we expressed confidence that they will continue to contribute to the further development of our multifaceted relations.

Further strengthening of the constructive multi-level political dialogue between the two countries, which plays an important role in deepening the atmosphere of mutual understanding and trust, was considered in the interests of both sides.

The expansion of inter-parliamentary cooperation was also assessed as a favorable basis for this process.

In order to expand economic and trade cooperation, including the improvement of the structure of trade between the two sides, it was considered necessary to make greater efforts of sectoral institutions.

It would be expedient to intensify contacts between the private sector and entrepreneurs of the two countries in the areas of trade and investment.

The Tajik side considered it effective to hold exhibitions of goods and business forums in each other’s territory to achieve these goals.

At the same time, it was recognized that the establishment of expanded cooperation between free economic zones and industrial towns of the two countries is in the interests of both sides.

The role of the Joint Commission on Trade, Economic, Technical and Cultural Cooperation in the process of reviewing and strengthening economic and trade ties was considered important.

In order to expand economic and trade cooperation, increase trade and human contacts, the need to develop infrastructure and connect the transport networks of the two countries was stressed.

The Tajik side welcomes the joint efforts to build land roads connecting the two countries.

In this context, we expressed our interest in access to the seaports of Iran, as well as the use of the ports of Chabahar and Bandar Abbas for the transportation of goods and products.

It was recognized that relations between the regions of Tajikistan and Iran can be promising in other areas.

Emphasizing the existing potential in the field of tourism, we consider it expedient to establish a favorable system of communication between the two countries for the development of cooperation in this area.

Thus, the further strengthening of the legal and treaty framework in the areas of mutual interest was considered an important factor in the development of effective multifaceted relations.

We, in view of the current sensitive situation in the region and the world, have expressed our interest in developing cooperation in the field of security.

In this regard, special attention was paid to the current situation in neighboring Afghanistan.

Tajikistan has expressed its support for all political, diplomatic and humanitarian efforts aimed at ensuring security and preventing human tragedy in this neighboring country.

We called for strengthening cooperation in the fight against terrorism, extremism, drug trafficking, transnational organized crime and cybercrime in the interests of both countries and the region.

We voiced satisfaction with the state and intensifying process of cooperation between Tajikistan and Iran in the framework of international and regional organizations.

We agreed to continue our fruitful cooperation in these formats.

In conclusion, I would like to thank His Excellency, the President of the Islamic Republic of Iran, Sayyid Ebrahim Raisi for his fraternal welcome and wish all the civilized people of ancient Iran peace, stability and prosperity.