Top-level talks between Tajikistan and Iran

Consideration of issues of cooperation between the two countries began at a tete-a-tete meeting of the heads of both states Emomali Rahmon and Sayyid Ebrahim Raisi, and then continued in an enlarged format with the participation of official delegations of both sides.

During the meeting a constructive exchange of views took place on the current state and prospects of Tajik-Iranian relations.

The President of the Republic of Tajikistan Emomali Rahmon first thanked the leader of the friendly country for the invitation to pay an official visit and a warm welcome.

Satisfaction was expressed over the level of friendly relations and cooperation, including the continuation of constructive political dialogue between the two countries at the highest level.

It was stressed that the strengthening and expansion of cooperation with Iran since the beginning of independence has been a special focus of Tajikistan’s foreign policy. In this process, it was considered necessary to enhance the constructive political dialogue between the two countries, based on mutual understanding and trust, and with respect for common historical values, to expand mutually beneficial cooperation between the two countries.

During the talks the sides noted the expansion of inter-parliamentary ties, fruitful activities of «friendship groups», comprehensive cooperation in economic and trade spheres, including transport, energy, industry, culture, education, science and security as important factors in strengthening and expanding relations between the two countries.

In the framework of trade and economic relations, the parties agreed to increase trade turnover between the two countries. In this regard, it was considered expedient to intensify the work of the Joint Commission on Trade, Economic, Technical and Cultural Cooperation, the development and implementation of a long-term program of economic and trade cooperation until 2030, the establishment of the Tajik-Iranian Joint Chamber of Commerce and Industry and the Joint Investment Council.

It was proposed to make extensive use of the holding of specialized exhibitions and forums of entrepreneurs and businessmen of the two countries and the establishment of small and large industrial enterprises with joint ventures in the free economic zones of the Republic of Tajikistan for the development of trade relations. The establishment of extensive cooperation between the industrial towns of the two countries was also called mutually beneficial.

Taking into account the great natural resources of Tajikistan, the use of Tajikistan’s vast potential in the energy, light and food industries, mining and metallurgy, chemistry, construction and pharmaceutical production, agriculture, transport and tourism was considered necessary.

In the framework of bolstering cooperation in the field of transport, the development of communication infrastructure and connection of land transport networks, improvement of existing conditions and effective use of the potential of the ports of Chabahar and Bandar Abbas was called an important tool for expanding economic and trade cooperation.

The construction of the Istiqlol Tunnel and the Sangtuda-2 Hydroelectric Power Plant in the Republic of Tajikistan has been assessed as an example of constructive cooperation between the two sides.

During the meeting the sides also exchanged views on the expansion of cooperation between regions and provinces, the development of cultural and scientific cooperation, tourism and the launch of direct flights between the capitals of the two countries.

Upon the discussion of security issues, the development of cooperation in the fight against terrorism, extremism, arms and drug trafficking, transnational organized crime and cybercrime was deemed necessary.

In the course of the meeting the sides also discussed issues of security and stability in the region and the current situation in Afghanistan.

Issues related to regional security, international developments, combating modern threats and challenges, as well as support for constructive initiatives and mutual positions on current issues were among the key issues of multilateral cooperation. 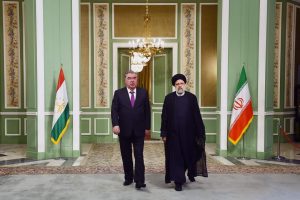 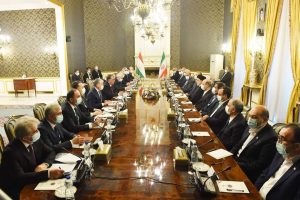