On October 13, the Founder of Peace and National Unity — Leader of the Nation, President of the Republic of Tajikistan, Emomali Rahmon, met with the Minister of Energy and Infrastructure of the United Arab Emirates Suhail Al Mazrouei within the framework of the Summit of the Conference on Interaction and Confidence Building Measures in Asia in Astana (Kazakhstan).

During the meeting, issues of cooperation between the two countries were discussed.

At the beginning of the conversation, the President of the country, Emomali Rahmon, said that the United Arab Emirates occupies an important place in the foreign policy of the Republic of Tajikistan: “We advocate and promote strengthening and expanding multifaceted cooperation with your country.”

During the meeting, the parties exchanged views on the development of trade and economic ties and investments, expressed satisfaction with the level of political relations between the two fraternal and friendly countries, as well as cooperation within international organizations.

At the meeting, the parties reviewed the development of cooperation in promising areas of energy, the opening of joint ventures in the mining industry of Tajikistan, the processing of cotton and end products, the use of large hydropower resources, investment projects beneficial to the parties, and cooperation between financial and banking structures.

In the agricultural sector, it was recognized as necessary to strengthen cooperation in the direction of establishing the export of agricultural products from Tajikistan to the Emirates, including fresh fruits, dried fruits, vegetables, honey, as well as livestock and meat products.

The expansion of relations in the field of tourism has become one of the promising areas of bilateral relations between Tajikistan and the UAE.

It was considered expedient to increase the number of air routes and connect the capitals by opening direct flights between Abu Dhabi and Dushanbe.

During the meeting, the parties also fruitfully discussed other important issues of mutual interest. 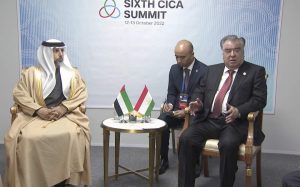 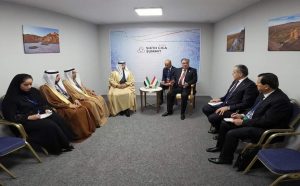