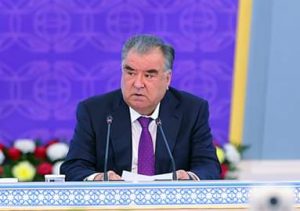 I am pleased to welcome all of you to Tajikistan to participate in this important international conference on a topical issue of the current world.

Today’s conference is the third high-level event organized by the Government of Tajikistan in cooperation with the United Nations, the European Union, the Organization for Security and Cooperation in Europe (OSCE), Qatar, Saudi Arabia and other international partners within the “Dushanbe Process on Counterterrorism”.

Taking this opportunity, I would like to express my gratitude to the leadership of the earlier mentioned organizations and partner countries for their support in the process of arrangement of this conference.

I hope that this conference will facilitate comprehensive discussion of the issues of security, border management and effective resistance to extremism and terrorism, in particular, prevention of the movement of terrorists across the borders, and result in concrete decisions.

It is obvious that over the years, the range of threats and challenges arising from terrorism and extremism has been steadily expanding. This destructive phenomenon causes terrible consequences, and the activities of terrorist and extremist organizations and groups are increasingly gaining transboundary and transnational nature.

Moreover, the rapid spread of the infectious disease of COVID-19 over the past two years and its consequences have made the process of countering these threats even more difficult, disrupted the process of the 2030 Agenda implementation and achieving its sustainable development goals in various regions of the world.

Terrorist groups having abused this situation are expanding their extremist activities, recruiting more young people to their ranks, encouraging and committing terrorist attacks, including using information and communication technologies.

It is unfortunate that without understanding the real goals of extremist and terrorist organizations and groups, some mass media provide platforms or other opportunities to them for expressing the views of their leaders.

In our view, this approach is unconstructive and promotes destructive groups in the international community.

It is also worth noting that today, extremist and terrorist organizations and groups are extensively using advanced information technologies in the pursuit of their nefarious goals, and this issue should be the matter of serious attention and actions by the experts and the persons in charge.

According to analysis and forecasts, such a situation will continue in the region and some countries of the world in the future, and the presence and activities of ISIS and Al-Qaeda will expand.

Therefore, there is a need to develop new innovative approaches to the joint counteraction to terrorism and the spread of the ideology of extremism and religious radicalism, including the use of modern technologies.

Tajikistan faced an imposed civil war and large-scale extremist and terrorist operations in its early years of independence.

Today we declare with full confidence that thanks to the unity and support of the people and the constructive policy of the Government, our country has escaped from the abyss of that tragedy, and therefore we would like to alert the world community about the danger and consequences of this extremely destructive phenomenon.

This is the very reason, Tajikistan has actively participated in all international efforts and activities aimed at eradicating this unfavorable phenomenon, and became one of the active participants in the international anti-terrorism community.

I am are pleased to note that the gradual improvement of legislation and the implementation of national programs and strategies enabled us to lay foundation for a targeted and coordinated public policy to counter terrorism and extremism.

As part of the implementation of the National Strategy of the Republic of Tajikistan on Countering Terrorism and Extremism for 2016-2020, the Government of the country, among other significant achievements, has also improved its mechanism for preventing extremism and strengthened the role of education and civil society.

The specific actions undertaken by the Government of Tajikistan resulted in returning more than 400 citizens of our country, mainly women and children from Syria and Iraq, as well as more than 5000 Tajik students from foreign religious education institutions with a view to avoiding their accession to terrorist and extremist groups.

Currently, we are continuing effective actions to rehabilitate them, and we feel the cooperation of development partners in this process.

We have stressed on many occasions that Tajikistan is at the forefront of the fight against the threat of extremism and terrorism, and we are protecting not only the region, but also territories beyond from the catastrophic consequences of this phenomenon.

Given the difficult situation in the region, the Government of Tajikistan pays an utmost attention to the constant strengthening of the protection of the state border and takes necessary actions to prevent the cross-border transfer of terrorist fighters, drugs and weapon trafficking, and other transnational crimes.

With a view to improving the state border protection process, as early as in 2010, we adopted our National Border Management Strategy and its Action Plan on Border Protection System Reform to 2025 with the support of international partners.

It should be emphasized that under the current circumstances, the transfer of terrorist fighters from the war-torn areas of the Middle East to other regions and the strengthening of the positions of international terrorist organizations in Afghanistan poses a serious threat to the Central Asian states.

Imposing extremist ideas on the minds of young people and the existence of so-called international extremist and terrorist «silent groups» are among the serious threats to the security of the region.

Unfortunately, terrorism is still justified in various forms in some parts of the world and is imposed in the minds of selected groups under the slogans of extremist ideology.

In other words, terrorist movements involve a specific process of targeting, mental and physical preparation. In order to ensure the security of the region and the world, systematic prevention of such a process and its tragic consequences is among the extremely immediate measures we need to undertake.

We hope that the countries of the world will jointly lead effective counteraction to this unfavorable phenomenon and will succeed in preventing the movement of terrorists, their transfer from one region to another, understanding the factors provoking terrorism, as well as developing a common position on the definitions of extremism and terrorism.

The terrorist groups continue their attempts to cross borders in the remote areas with geographical and climatic difficulties.

Taking into account the current security situation, the international community should understand that the extremism and terrorism with all its rude manifestations do not associate with any nationality, religion and citizenship.

In this regard, we need to understand that the constructive cooperation of the international community is the only main way to effective counteraction in order to eliminate the issue of terrorism.

It is obvious that the countries of the world, having coordinated the process of combating terrorism and extremism, made significant accomplishments in creating the relevant legal framework by the initiative of regional and international organizations. However, as time has shown, they are insufficient to adequately respond to all existing terrorist threats.

As the reports of the United Nations relevant agencies mention, this situation has arisen due to the lack of a unified approach and mutual understanding between the countries during the legal and definition screening of this dangerous phenomenon.

From this point of view, as long as all international actors do not define terrorism and extremism specifically and apply uniform approaches to combating them, it will be practically impossible to ensure the coordination of efforts of countries in the fight against this anti-human phenomenon.

We have to recognize that a successful response to any adverse act is associated with an understanding of its content and limitations, its defining characteristics, causes and variety of measures taken.

Also, real and transparent cooperation in the fight against terrorism and extremism is important and in the interests of all parties to ensure the protection of borders, the constitutional order and the systemic development of states.

Tajikistan regards the reliable protection of its state border and finding opportunities to strengthen it as extremely important measure.

Tajikistan and Afghanistan have 1400 kilometers of border line with complicated mountainous terrain, which makes up about 60 percent of the borders of Central Asian countries with this country.

In such circumstances, we are taking necessary measures to strengthen the borders and over the past two years we have built and put into use more than 175 border facilities.

It is worth mentioning that at the same time the construction of 30 other facilities is going on, and we need to build another 300 of this kind of facilities in the future.

In this regard, urgent efforts would be important to implement the initiative of Tajikistan — the concept of «Security Belt» around Afghanistan in order to prevent and reduce the consequences of dangers and threats.

In order to prevent the activities of terrorists, it is necessary for the states to implement control measures in accordance with their commitments and within the framework of international law while protecting the borders.

Nowadays, we observe that terrorists and extremists make good use of the institution of «refugee» and «asylum seeker» and abuse the trust of advanced countries.

From this point of view, it is necessary to review the human values and human rights separately from terrorism and extremism, to not give shelter to those involved in terrorist acts and those, who are found guilty for such actions, and to arrest and prosecute such persons in time.

Ensuring reliable border security is extremely important to prevent the threat of terrorists and extremists through land, air and sea borders.

It should be emphasized that an effective fight against modern destructive phenomena requires taking collective measures.

Ensuring reliable border security is essential to prevent the threat of terrorists and extremists from penetrating land, air and sea borders.

It should be emphasized that an effective fight against modern destructive phenomena requires the adoption of collective measures.

To this end, the Republic of Tajikistan cooperates with a number of regional and international organizations, including the European Union, specialized agencies of the United Nations, the Organization for Security and Cooperation in Europe and donor countries such as Japan, the United States of America, China and Russia in implementation of various border control projects.

Given the rapid development of border control technologies, there is a need to provide border control agencies with modern technical means for the timely detection and suppression of attempts by terrorist and extremist groups intending to violate the state border system.

The implementation of this initiative requires studying the experience of developed countries and the gradual introduction of advanced international standards in state border management.

Therefore, ensuring reliable technical means in this area is deemed to be one of the main tasks of the international joint fight against terrorism.

I hope that the scope of Tajikistan’s cooperation in this important area will further expand in the near future.

We need close cooperation based on existing mechanisms to raise awareness, knowledge and strengthen the capacity of states in the fight against terrorism.

With best wishes to all conference participants in exploring solutions to achieve a world free of terrorism and extremism, I would like to once again express my gratitude for your visit to Tajikistan.

I thank you for your attention!